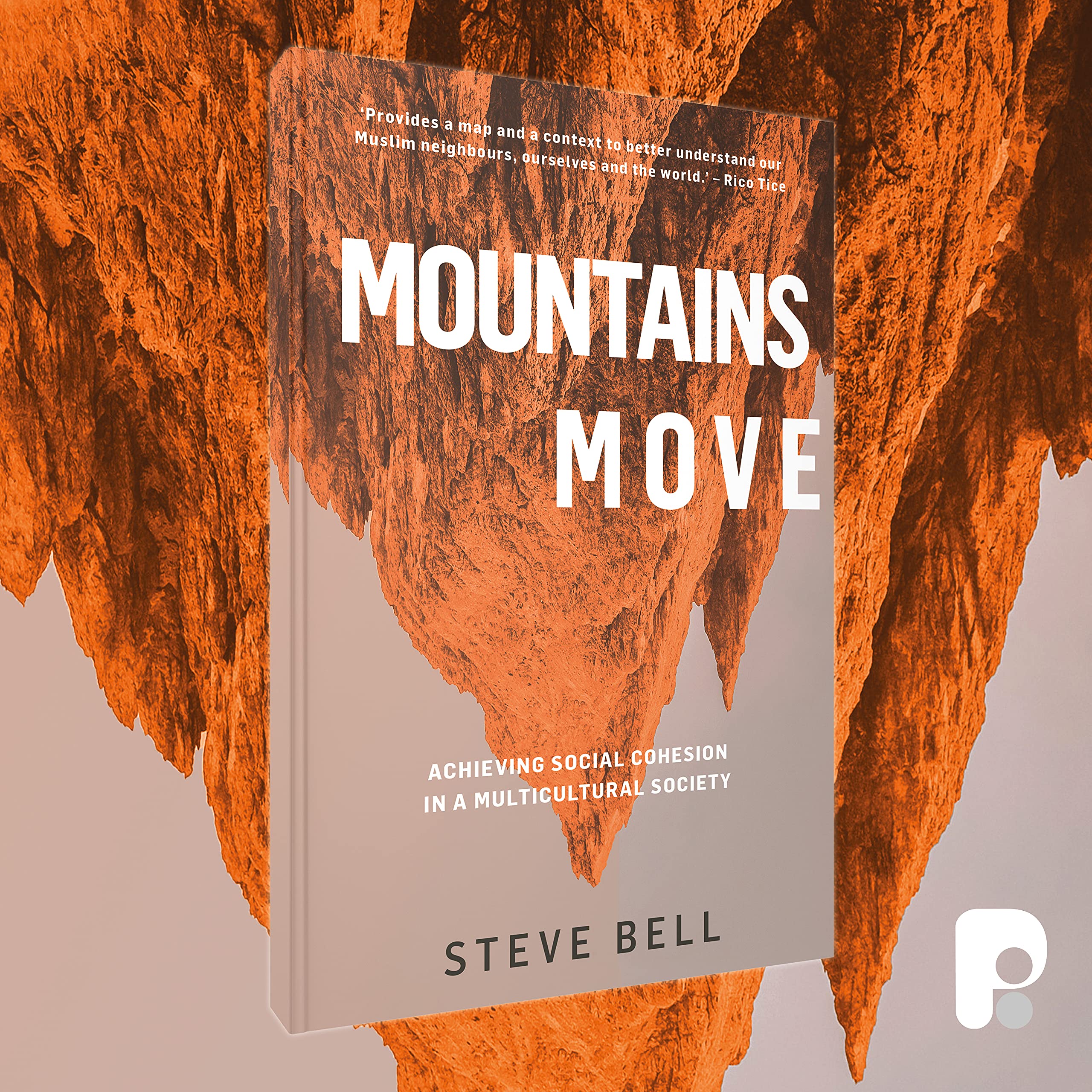 Society is made up of various cultural groups trying to live together. We aim for social cohesion, but how do we do this as society becomes increasingly complex, aided and abetted by political correctness?

In his new book Mountains Move, Steve Bell peels back the complex layers of our multicultural society to reveal the inner workings of our national life. Using the metaphor of a mountain range, he identifies the major obstacles to meaningful and mutually respectful interaction between non-Muslims and people of Muslim heritage, and encourages a more intelligent engagement by Christians with their own western culture.

Steve Bell is an internationally recognised communicator, speaker, writer and consultant. He has forty years’ experience in cross-cultural issues in more than 120 countries. Steve’s passion is to facilitate effective interaction between Christians and Muslims.

Steve, why did you decide to write Mountains Move?

Because the negative narrative about all minorities seems to have increased again in western society.

What is the significance of this title?

The invisible barriers between groups within western society are every bit as effective as a geographical mountain range, which can divide nations from one another.

Who have you written this book for?

Primarily for all concerned and fair-minded people, whether part of a faith community or not. It is also aimed at Christian leaders, organisations, and places of training, to help “the church” become savvy about the effects of history on our assumptions today, how society works today, and where the PC social landmines are buried.

Your personal experiences and working life make you uniquely qualified to write this book – can you tell us a little more about this?

The inspiration for the book started with the idea of a mountain range and a grace pass – can you explain a little more about this? And why do you think this is a helpful way of looking at the issues?

Many Christians who engage with people outside their own community tend to assume we are still living in Christendom and that society knows and understands the value of ‘the Christian story’. They do not, and secularising influences mean the Christian message has to earn a right to be heard. We are living in a generation which needs the gospel to be explained rather than ‘preached’. To be relevant and effective, we must first understand how society works today and how also to fashion the Christian message accordingly, so we speak to felt need.

Because many Christians are not yet able to do this, blunders frequently occur when trying to engage online via social media or the press. Also, many Christians seem oblivious to the fact that ‘all evangelism has social consequences’ which need to be factored in. Society is not only assessing what is being said, but also how it is being said.

Why did you choose the particular ‘mountains’ to look at?

I chose the seven issues as seminal to all current issues swirling around in society at the moment. The chosen order of the mountains is intentionally presented to show chronological order and the sequential link e.g. the ‘colonial’ era led to ‘hegemony’, which led to an ‘ethnic pecking order’. Against the backdrop of these mountains comes the more recent and contemporary issues which are stirring the pot; namely the influence of ‘political correctness’ (and woke cancel-culture), a resurgence in ‘strident’ social discourse’ (over issues such as race, gender, and immigration), then the threat of ‘dangerous religion’ and the apparent crisis in organised religion in the house of Islam in particular.

What was the most challenging element of writing the book?

The conveying of such a broad spread of issues, which people often assume are not linked, and how to show simply and briefly what they are. Also, because I have talked about the divergent views about Muslims/Islam, and whether Christians can in fact balance ‘grace’ and ‘truth’ in their interaction with Muslims, I had to work hard to try to help both ends of the spectrum to keep reading.

And what was the most rewarding element of writing this book?

For me it is like a memoir of my life’s journey over 40 years. It was satisfying to try to bring together the divergent views and try to show how they need each other.

Have you learnt anything new while writing this book?

My biggest takeaway is perhaps how “western” and culturally restricted we are in our worldview and theological assumptions. Also, how amazing it is that God is doing what he is, amidst such a minefield both politically and theologically.

What do you hope readers will most get out of reading this book?

Inspiration that the Lord of history is indeed at work in a turbulent and messy world.

In one sentence, how would you describe Mountains Move?

You can purchase Steve's book here >